Bitcoin is currently hovering around the price region it has been stuck at for the past week. Buyers and sellers have reached a clear impasse as they struggle to spark a trend in either direction.

Extended periods of sideways trading like this have been seen in the past, and they are typically followed by bouts of immense volatility.

As such, it is likely that the benchmark cryptocurrency is currently coiling up in order to make a massive trend-defining movement.

One analyst does believe that this next move will heavily favor buyers.

He notes that the cryptocurrency is likely to post a breakout rally in the coming seven days.

Bitcoin Consolidates Beneath Resistance as Analysts Watch for a Bullish Movement

At the time of writing, Bitcoin is trading up marginally at its current price of $9,750. This is around the point at which it has been trading at for the past week.

BTC’s ongoing consolidation phase came about in the time following the immense volatility seen at the start of last week.

It did recover swiftly from these lows but has been trading sideways ever since.

One analyst spoke about this sideways trading in a recent tweet, explaining that periods of trading directly beneath resistance for this long are typically followed by breakouts.

“BTC: Outside the Darth Maul fake out on June 1st/2nd – Bitcoin price has held in a range between $9300 & $9900 for the past two weeks. The daily close continues to hold under $9800. But sitting right under resistance for this long, one would think Bitcoin pushes through it soon,” he explained.

Other analysts also think that the next Bitcoin movement is likely to favor buyers.

Mohit Sorout – a founding partner at Bitazu Capital and a respected analyst – explained that one indicator seems to suggest that a breakout rally is imminent in the coming several days.

“Time for BTC to breakout within ~7 days,” he noted. 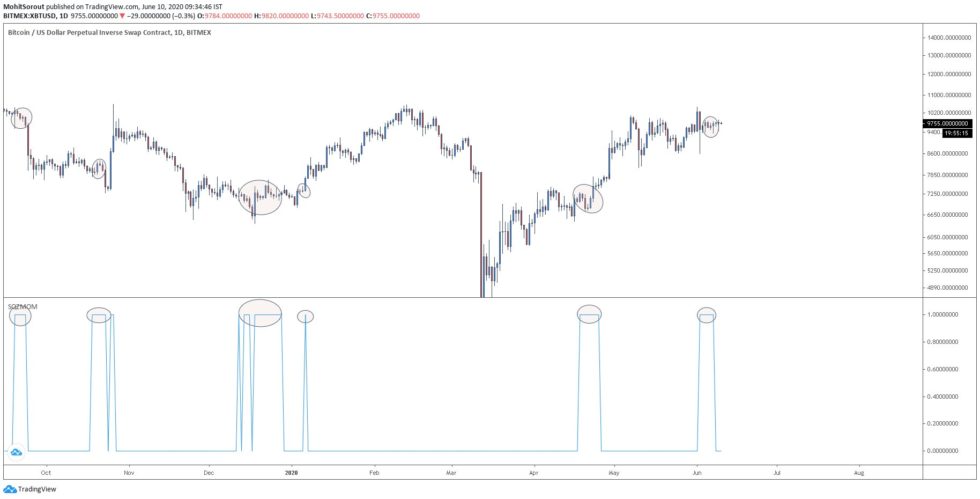 While looking at the above chart, it does appear that the Squeeze Momentum indicator he referenced above seems to spike during bouts of consolidation that are followed by sharp upwards movements.

3 Reasons Why Bitcoin Price Continues to Reject at $10,000