On-chain data from blockchain analytics firm CryptoQuant suggest that miners are currently holding on to their mined BTC, a sign that may indicate a continuing recovery for the Bitcoin price given a lack of selling pressure from big mining operations.

The Miners’ Position Index (MPI) provides insight into how miners shifting their BTC positions can impact the asset’s price action. An MPI reading above 2 suggests miners are selling their BTC after mining, while a negative value shows they’re avoiding selling as much as possible in favor of accumulation.

The chart above shows an MPI reading of -0.59 following a slight recovery from the yearly low of -0.79 on June 2, suggesting that major miners are not selling their newly minted coins, choosing instead to wait for a more favorable Bitcoin price, a scenario that has been observed before.

During November of 2018, a month that saw the Bitcoin price drop from $6,500 to around $3,700, miners showed similar behavior, choosing not to move any coins during the bear market and opting for a higher selling point.

Once the price started to recover during May, June and July of that year, the MPI showed positive values in all three months. Currently, the MPI shows similar behavior to that of November 2018 which indicates that miners are not too eager about selling BTC at the current price. 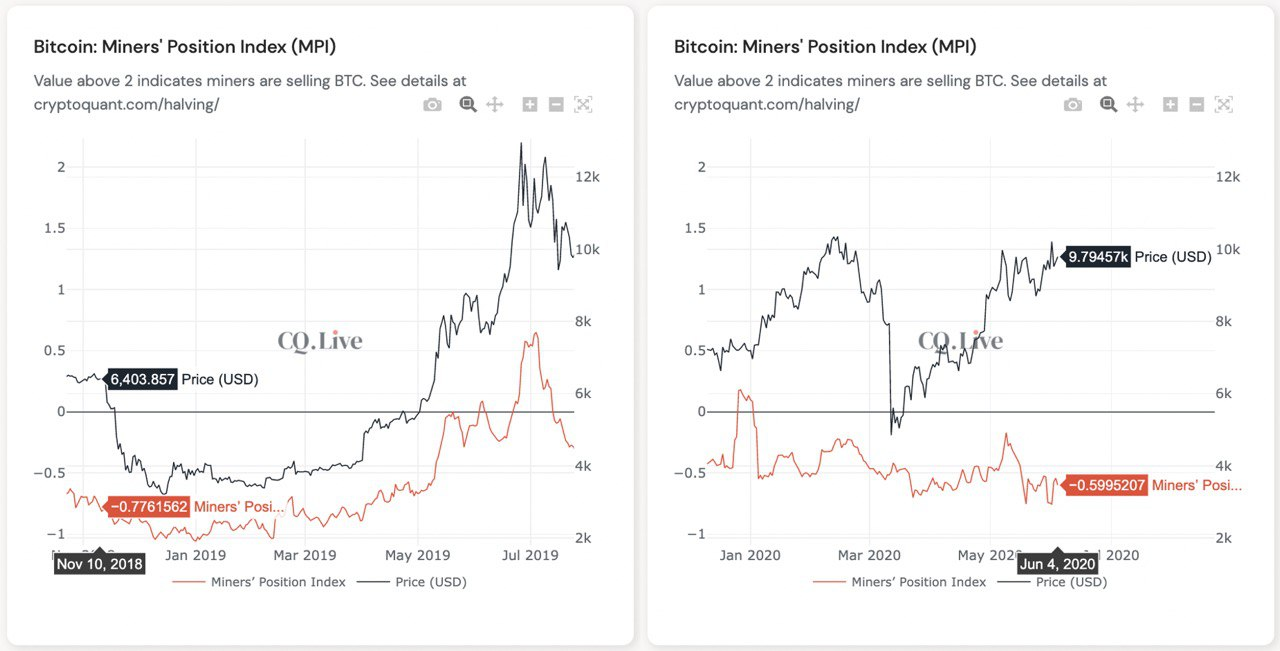 According to CryptoQuant CEO, Ki Young Ju, a MPI below -0.7 means major miners will not sell their new coins. Ki Young Ju explained:

“In 2018 Nov, the MPI index went under -0.7 and the price dip happened. They didn’t move any bitcoins during the depression, and even the MPI index went -1 minimum. They started to sell BTC when the bullish market came. This indicates that if the MPI index goes more under about -0.7, the major miners decide not to sell any BTC, which means we’re close to the bottom although a few more dips may be coming.”

Prior to the Bitcoin halving, similar prices commanded a much higher MPI but with increased production costs, miners need a higher price in order to break even which explains why some smaller mining operations seem to have entered a capitulation process during the last week of May.

Data from Bytetree shows that during the last week of May, Bitcoin price dipped below the $9,000 mark before recovering to $9,200 on May 27, seems to have led miners to sell more BTC than they mined.

According to Ki Young Ju, the high MRI was the result of capitulation by some operations. He explained that:

“I think this would be just a temporary dip because only the unknown miner and small miners are capitulating for now.”

Given that the Bitcoin price continued to recover even as miners sold more than they mined, it seems that the sell off is the result of inefficient miners dropping off, a process that can lead to a more robust and volatile market for Bitcoin. Previously Blockware mining CEO Matt D’Souza told Cointelegraph:

“After shutting off, Bitcoin they were receiving is allocated to the more efficient, experienced miners with excellent margins who are positioned to accumulate a larger percentage of the newly minted Bitcoin rather than having to sell it — significantly reducing sell pressure.”

The current week has set a more positive tone for BTC miners as the number of mined BTC only exceeded the mined amount by 108. As of June 5, miners had mined 95 more BTC than they have sold.

While on-chain data pertaining to miners is only a small piece of the endless puzzle that is the Bitcoin price, it seems that efficient miners are now holding on to their BTC as shown by the recovering MRI.

Capitulation of inefficient miners may lead to sell pressure at higher price points by more capable operations, a factor supported by the low MPI currently observed.

Bitcoin at Grave Risk of Cratering to $7,400 as it Taps Multi-Month Trendline