In its latest report cryptocurrency data provider Coin Metrics predicted that Bitcoin’s daily volume could eclipse that of the U.S equity market, if growth rates are maintained. But how likely is it really?

The report cites Bitcoin as an asset class with incredible growth potential due its low trading volume compared with more traditional markets:

“The interpretation is that Bitcoin, in its current state, is most comparable in size to a large capitalization stock rather than a distinct asset class.”

But Coin Metric’s projects an exponential increase in daily volume:

To achieve this, Bitcoin’s current volume would need to increase by more than 100X from Coin Metric’s current figure to exceed the daily volume of US equities. This also assumes no growth in the equity market between now and 2024. 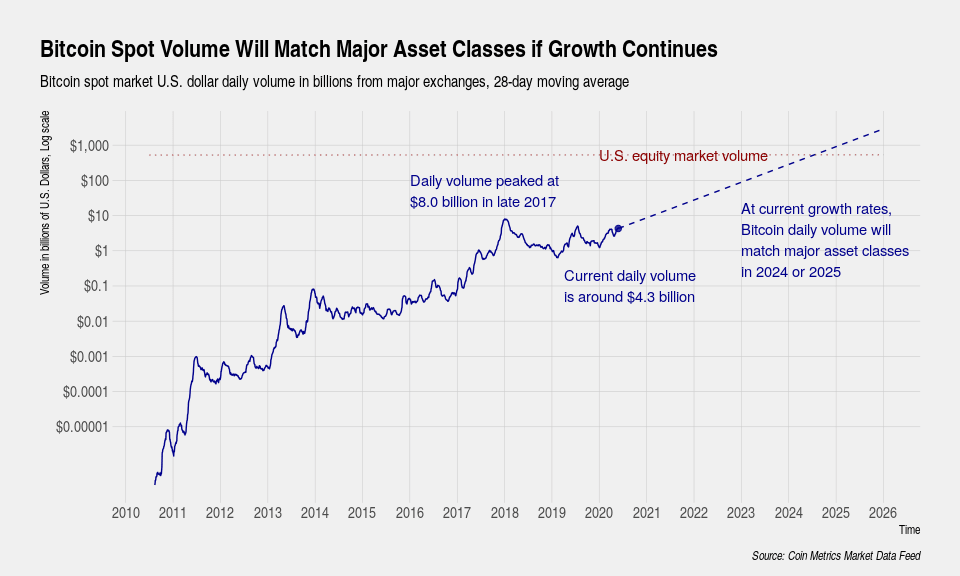 While it seems a tall order, Coin Metrics suggests that not only could Bitcoin trading volume overtake these major asset classes within five years, but it has the potential to reach $1 trillion by 2025. This would be incredible growth from a young and emerging market in order to outpace one that has existed for over 200 years.

The report discusses the difficulty in accurately measuring Bitcoin’s daily volume with different methods yielding significantly different results. The biggest market by far is the derivatives market which accounts for $13.9 billion in trading volume, however this is still a developing market and isn’t included in the main analysis:

“If reported volumes are to be believed, gaining exposure through derivatives markets may be the most efficient path. However, crypto derivative markets are still developing, and market participants must contend with a confused mixture of differing contract specifications.”

Coin360 and CoinMarketCap’s reported Bitcoin’s trading volumes of over $9 billion and over $25 billion respectively, casting confusion as to which is the most accurate figure. However the Coin Metrics data refers to U.S. dollar volume. 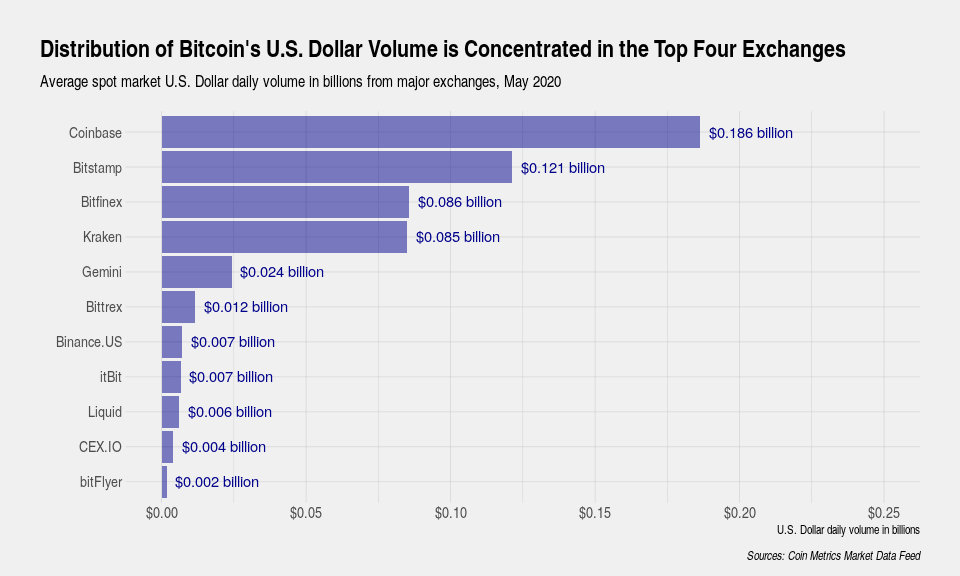 Coinbase, Bitstamp, Bitfinex, and Kraken account for 90% of the $500 million in reported daily volume.

What does the future hold

The second half of 2020 will be defining as many analysts are predicting the setup for a new bull run. Should the bull run eventuate, not only will this increase trading volume but it will also see new investors and institutions entering the market which makes an exponential increase of 100x in the coming years all the more likely.

But the focus may also turn from Bitcoin to other coins as the novelty of an emerging financial market wears off and is replaced with a more technology-focused market.