This Stock Market Analyst Explains Why Bitcoin Will Keep Growing

Bitcoin has yet another Black Swan event on Tuesday as its price crashed by $1,500 in just three minutes.

Before the crash, the derivative market on BitMEX was majority long, which means most of the traders expected the bitcoin price to rally further into the week. That allowed the funding rate to hit new weekly highs at 0.19 percent. On a typical day, it hovers near 0.01 percent.

Nevertheless, when the price started moving southward, it liquidated about $120 million of long contracts – causing a “Long Squeeze.” So it seems, overleveraged positions elaborated a small price dip into a bigger one, crashing bitcoin from near $10,100 to as low as $8,600.

Despite the dip, Bitcoin is maintaining its overall yearly gains above strong support levels. So it seems, the crypto market, which is used to surprising wild move, would likely ignore the $1,500 price crash in the context of more relevant macro developments.

For instance, the U.S. stock market was as bizarre as Bitcoin on Tuesday. The benchmark S&P 500 rose higher even though investors assessed the civil unrest across the U.S. and tensions with China. A top stock market analyst noted that most of the short-term negative fundamentals do not matter.

“There’s just so much stimulus, it’s propping up the market. The stock market is now no longer a true reflection of the economy, and you’re going to see that remain the case for several years.”

Stifel (NYSE: SF) also said in an investor note on Wednesday that the S&P 500 could rally another 8 percent to 3,250 by August 30. The Wall Street firm noted that bottoming economic data, valuation growth, and optimistic technical outlook will offset risks associated with lower earnings.

“We believe the S&P 500 crossing the 50 and 200-day moving average on May 26 – May 27 signals a price of 3250 by August 30. Following a recession bear market, [crossing the moving averages] has historically signaled a price gain of 8% over the next 3 months on average,” the note read.

Bitcoin painted a similar technical structure on its daily chart on May 20 amid its recovery rally.

The cryptocurrency, like the S&P 500, had bottomed in March 2020, crashing erratically by more than 60 percent in just 24 hours. Nevertheless, it negated its losses entirely after rising by up to 161.25 percent, leading many observers to see its growing positive correlation with the S&P 500. 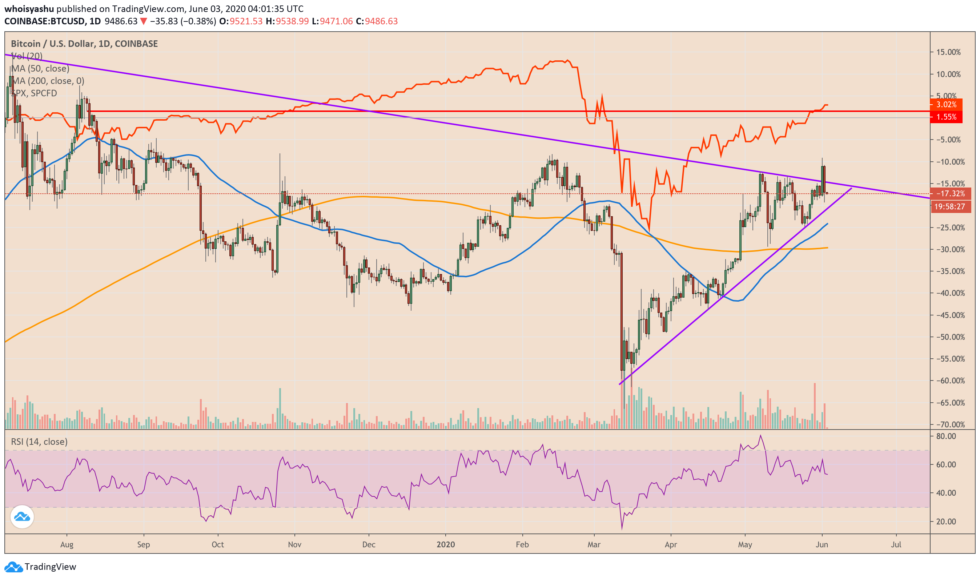 The connection between the two markets showed signs of decoupling in May 2020. But it resumed back against the backdrop of the rising Sino-U.S. geopolitical tensions over Beijing’s push for tighter security laws in Hong Kong. Bitcoin and S&P 500 erased part of their recent gains last Friday in tandem.

The losses surfaced as investors anticipated a new cold war between the U.S. and China. The sentiment, in turn, weighed on the intraday risk-on sentiment.

Despite its optimistic predictions for the S&P 500, Stifel mentioned a few risks that could spoil its rally.

The firm noted that the growing number of virus infections could put a brake on the U.S. benchmark’s upside moves. Meanwhile, it asserted the number of virus-attributed deaths would go down to zero by the end of next month. The real risk, Stifel, could come from political and media reactions to the virus.

‘It may have unpredictable economic effects,’ the firm said.

Meanwhile, Bitcoin will have its own-risks to battle. The cryptocurrency, now among the most profitable post-March asset, remained vulnerable to price manipulation at unregulated crypto derivatives exchanges. On a technical front, it has also failed to move above a long-term resistance trendline. 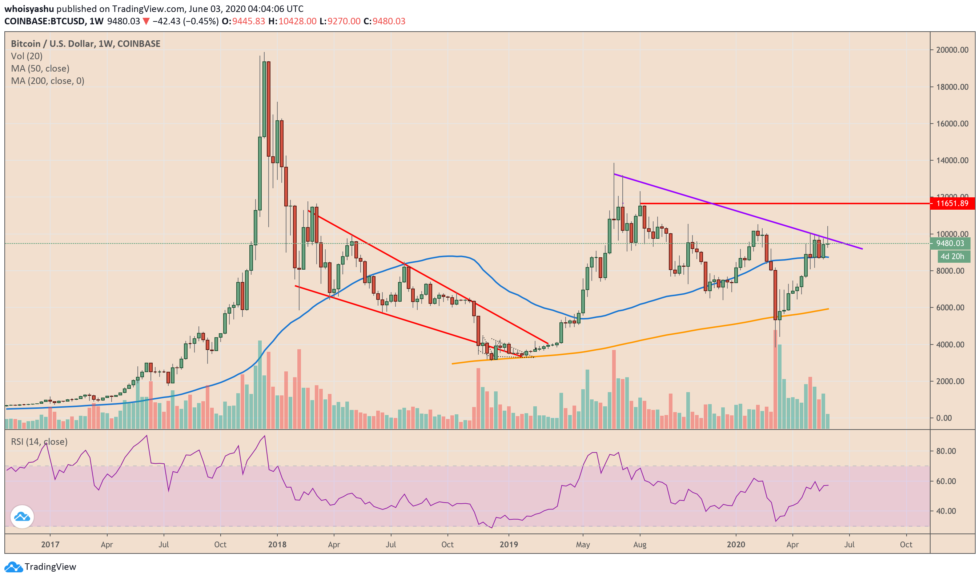 But market analysts remain optimistic without even referring to the S&P 500. One notable trader said that the “trendline” will become weaker after each retest.

“General rule of thumb – the more times a trendline resistance gets tested the weaker it becomes,” he explained. “Whoever artificially suppressing $10k to hold this “resistance meme” is repeating the mistake of 2018 “$6k support” holder.”

That puts Bitcoin’s upside target near $10,500, its year-to-date high.