Here's Why Bitcoin's Outlook Remains Bleak as Long as It Trades Below $10,500

Bitcoin has seen some immense volatility over the past day, rallying to highs of $10,400 overnight before plummeting back into the $9,000 region.

The crypto appears to be trading at a pivotal level, as buyers reclaiming its position within the $10,000 region would be an overtly bullish sign.

Analysts are noting that even if BTC does reclaim $10,000, isn’t in the clear yet, as it could still be prone to seeing significantly further downside.

One analyst even believes that a movement into the sub-$4,000 region could still be a real possibility.

At the time of writing, Bitcoin is trading up just under 1% at its current price of $9,500. This marks a massive decline from daily highs of just over $10,400 that were set overnight.

It also marks full erasure of the uptrend that was first incurred yesterday evening.

$10,000 has been a historically fleeting level for Bitcoin to trade at, as virtually all of its movements past this level in years past have been followed by sharp selloffs that result in bouts of capitulation.

The latest decline below this key level also seems to invalidate a previously bullish triangle formation that the cryptocurrency had moved to confirm.

One trader recently offered a chart showing this pattern, showing that prior to today’s dump the crypto was flashing signs of strength.

Here’s the Level BTC Needs to Break to Go Parabolic

Another trader recently explained that Bitcoin’s latest upswing didn’t lead it to surmount $10,500 – opening the gates for it to see further downside.

He does note that the crypto could soon go parabolic, however, if buyers are able to successfully flip $10,500 into a support level in the near-term.

“S/R flip of the $10.5k level: bearish scenario almost invalidated, and targets should be $12k and $14k. Consolidation above $14k and it will probably go to the ath.”

The same trader also explained that a close below $8,500 could confirm his bearish scenario – as seen on the below chart – which could lead Bitcoin to post massive losses. 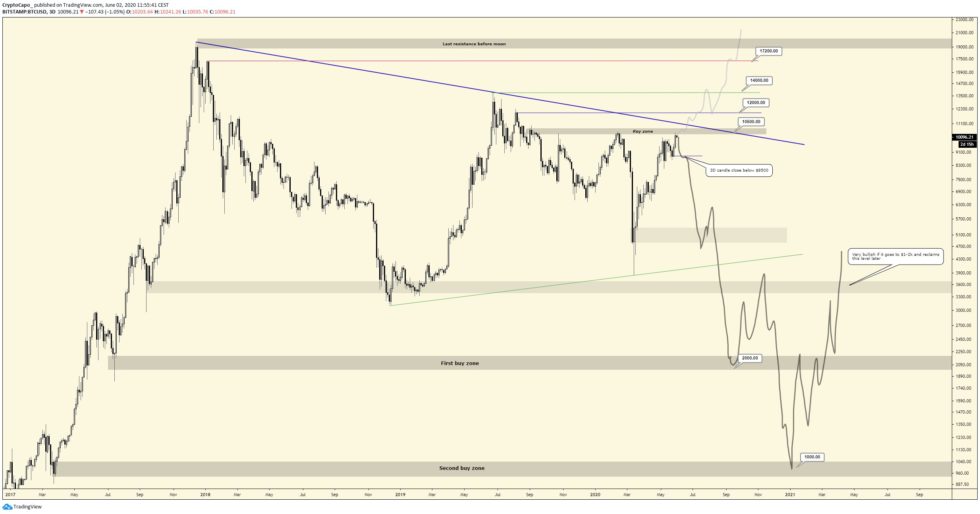 Crypto Could Save Millennials From the Economy That Failed Them