Leading crypto exchanges are holding around 1.36 million BTC, worth around $12,920,000. The last time major trading firms had such low Bitcoin reserves, the price of the dominant cryptocurrency surged from $3,150 to $14,000.

Market data indicates a growing number of investors are moving their Bitcoin holdings out of exchanges. It shows traders have no intention of selling BTC at the current price of $9,400.

Why are Bitcoin investors moving their funds out of exchanges?

In the first quarter of last year, the price of Bitcoin ranged between $3,150 to $4,500 for nearly four months. When the inflow of BTC from exchanges started to decline, the cryptocurrency began to rally. Within three months, BTC increased from $4,000 to $14,000, recording a 250% price surge.

At $9,500, Bitcoin is seeing the same BTC inflow volume into exchanges seen in early 2019. Fewer traders are depositing Bitcoin to trading platforms, which shows investors have no interest in risking their BTC to sell in the $9,500 to $10,000 range.

The 12-month low inflow of BTC into top cryptocurrency exchanges coincides with long-term indicators signaling the start of a new uptrend. Macro indicators like the golden cross and the Puell Multiple show Bitcoin is on the verge of a major bull run as seen at the start of 2019.

The Puell Multiple is a metric that considers the circulating supply by looking into miner revenue to measure if BTC is overbought or oversold. Currently, the Puell Multiple of BTC is hovering at 0.4. In mid-December 2019, when Bitcoin was at $3,150, it dropped to as low as 0.3.

The supply-focused metric shows Bitcoin could see another minor pullback in the short-term. But, in the short to medium-term, Bitcoin is expected to see a sizable rally. 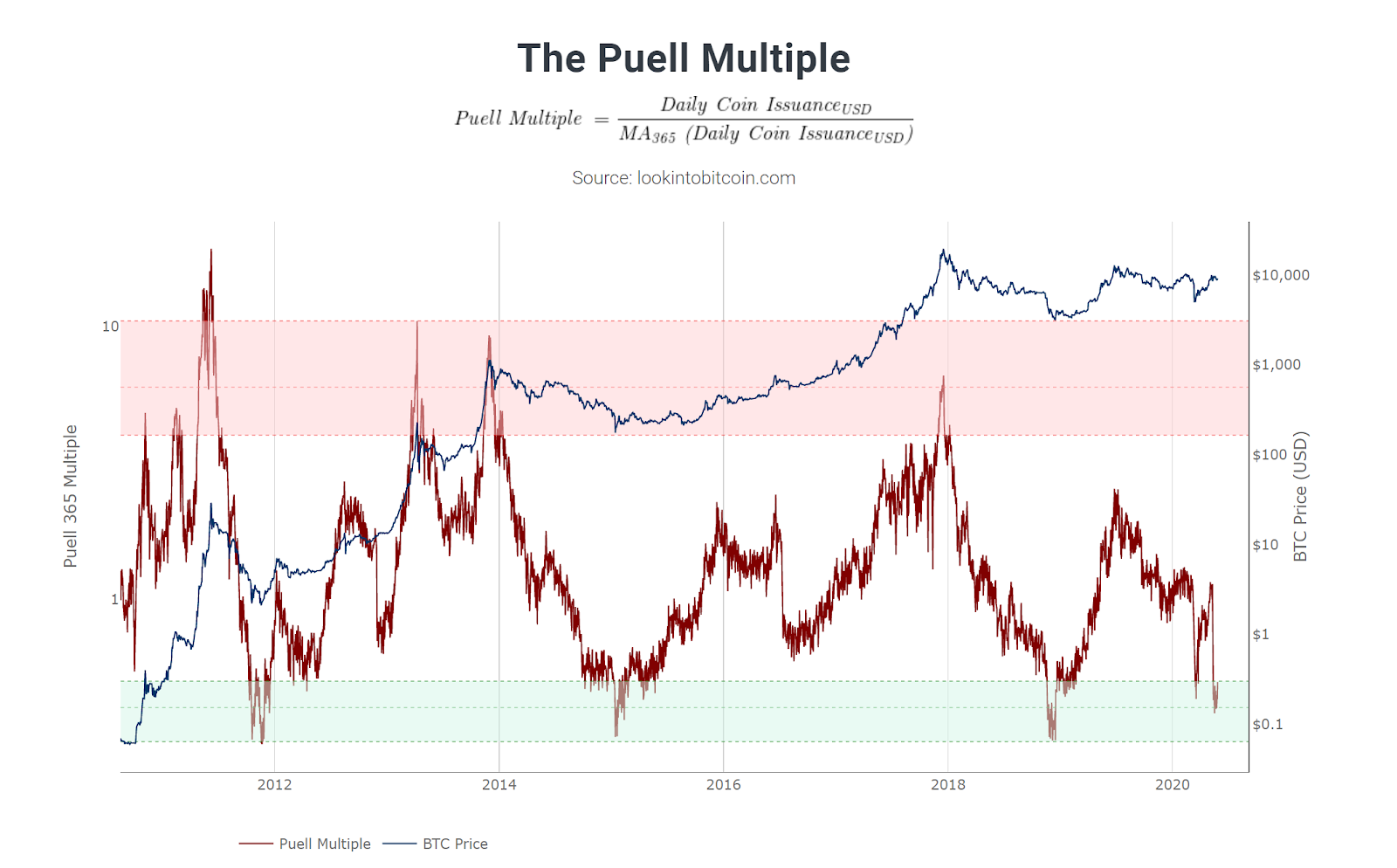 Bitcoin also recently recorded its seventh golden cross in history. Three out of the past six golden crosses led to a massive long-term rally.

A golden cross occurs when two long-term exponential moving average (EMA) lines cross one another. It typically happens when BTC is recovering rapidly from a steep sell-off.

We recently witnessed the 7th Golden CrossOx of bitcoin’s existence. Previous 3 out of 6 led to gigantic rallies. But sure any tool without a 100% win rate is a meme, must be shunned & discarded immediately. 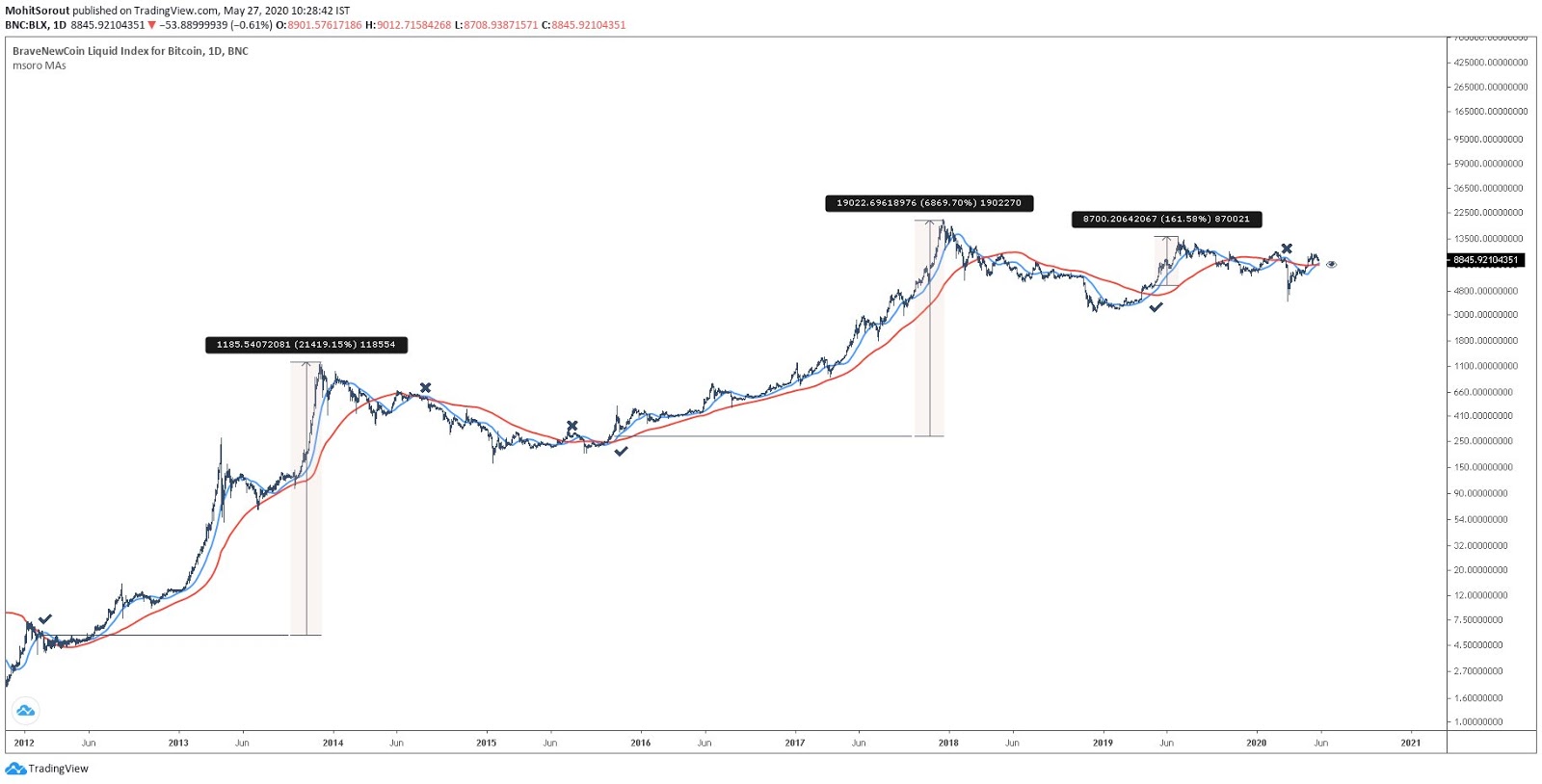 Two variables that are different from rallies in 2018 and 2019

The ongoing rally of Bitcoin is fundamentally and structurally different from previous rallies seen in the last two years.

This time around, there are a significantly higher number of retail investors and institutions leading the upsurge of Bitcoin rather than investors in the futures market that trade with high leverage.

With a lower risk of a major long squeeze, long-term macro indicators hinting at a major uptrend in the coming months are considered a positive factor for the medium-term price trend of Bitcoin.