Bitcoin recovered mildly at the beginning of this week after closing the previous one in severe losses.

The benchmark cryptocurrency fell nearly 10 percent to close the seven-day timeframe at $8,715. The move downhill marked bitcoin’s worst weekly performance since March 2020. As of Monday morning, the cryptocurrency was trading about 0.66 percent higher, around $8,773.

The losses came as a part of a broader downside correction that began after bitcoin’s 161.25 percent recovery from its March lows below $4,000.

The cryptocurrency topped near $10,000, only to fall back over high profit-taking sentiment among traders. Additionally, certain fundamental and technical factors weighed on the prevailing, short-term bearish sentiment.

Charles Edwards, digital asset manager at Capriole Investments, said the Bitcoin’s sell-off is a result of miner capitulation, noting that the block validators are selling their bitcoin rewards after the third “halving.”

“This capitulation is almost identical to the 2012 and 2016 halving capitulations (all within 21 days of the halving),” he added, explaining that bitcoin fell 1.8 percent and 13.8 percent after its last two halving events in 2012 and 2016, respectively.

Mr. Edwards noted that capitulation is bullish for Bitcoin while basing his analysis on the 2012 and 2016 fractals. The analyst argued that halvings increase the cost of mining one bitcoin unit, which, in turn, increases its retail price.

Bitcoin, more or less, tailed falls and recoveries of the global stock market since March. So it appears, investors dumped their crypto holdings to cover their losses elsewhere. The strategy created an uncanny correlation between the cryptocurrency and traditional risk-on assets.

It is further evident in Bitcoin’s inability to close above a long-term technical resistance level, defined by a Descending Trendline in the chart below. The cryptocurrency tested the blacked ceiling multiple times during its recovery but attracted no new buyer at the top near $10,000.

That caused a steep downside correction. 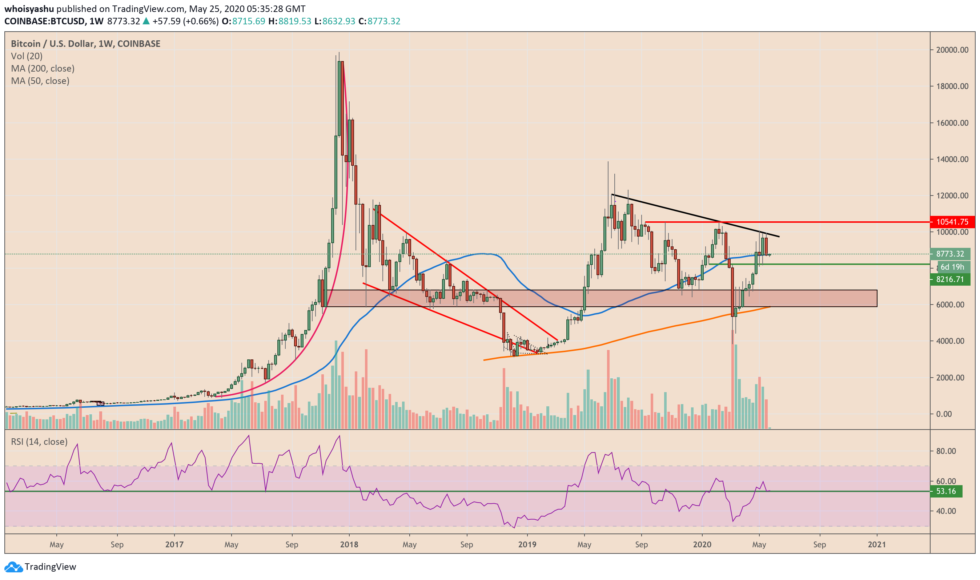 The latest pullback validated a strong bearish presence near the blacked trendline. It also showed that investors are unwilling to enter the bitcoin market at higher highs.

Meanwhile, traders are watching whether or not the cryptocurrency could attract buyers near its 50-weekly moving average support (blued wave).

Overall, investors are cautious about their bets in volatile markets such as Bitcoin, and even stocks. If that leads to cryptocurrency breaking bearish below 50-WMA, then it risks steeper declines towards $6,800 or below (the red bar).