Here’s How Bitcoin Could Force Altcoins to Set “Major Lows”

The aggregated cryptocurrency market has continued declining against Bitcoin, with the benchmark crypto gaining significant market dominance as investor siphon funds away from altcoins in favor of BTC.

This has led some prominent analysts to conclude that altcoins could be in for a bloodbath in the days and weeks ahead.

It is possible that this exodus away from altcoins is stemming from investors anticipating BTC to see some serious upwards momentum due to its imminent mining rewards halving event.

Analysts are now noting that the possibility of BTC seeing a post-halving crash, however, could be enough to drive many of its smaller counterparts to fresh multi-year lows.

At the time of writing, Bitcoin is trading up just under 2% at its current price of $9,450.

BTC has been able to extend the momentum that came about a couple of days ago when it began pushing higher after an extended bout of consolidation around $8,800.

This momentum has been unique to the benchmark crypto, however, as virtually all major altcoins have been declining throughout the past couple of days.

Currently, all of the top 30 digital assets by market cap are underperforming BTC, with many of them also declining against USD as well.

This weakness has led some analysts to note that altcoins could be in for some serious pain in the days and weeks ahead.

One trader spoke about this possibility in a recent tweet, explaining that he doesn’t see any path forward in which altcoins see positive performance.

“BTC Big jump today. A potentially very painful situation developing if it breaks out towards the next resistance. Each 1% rise in BTC.D roughly equates to a 6-12% drop against the BTC pairings for alts,” he noted. 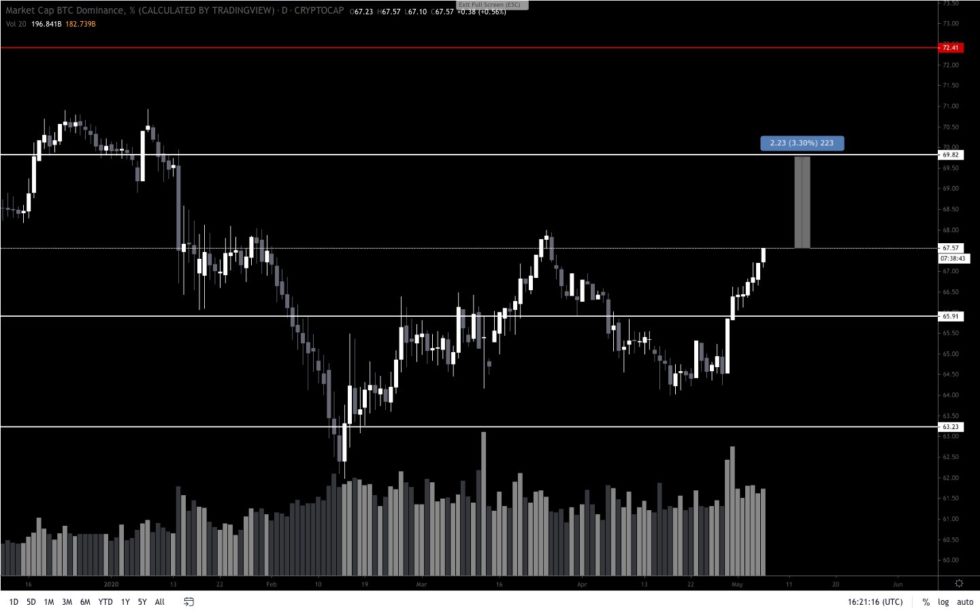 He explained that he is closely watching to see how Bitcoin trades following its upcoming halving event, as a price crash after this event occurs could be enough to drive many high market cap altcoins to fresh multi-year lows.

“Highcaps continue to sell off. If BTC sells off drastically post halving then expect alts to hit some major lows yet again,” he said, further adding that he “cannot see how the situation improves for alts over the coming weeks.”