Throughout the past day Bitcoin has faced multiple rejections at $7,200, with this further confirming that the resistance established within the lower-$7,000 has not degraded despite bull’s recent strength.

If buyers continue struggling to surmount this level, another rejection here could tip the scales back into bears favor, potentially leading the crypto significantly lower.

This comes as BTC’s market structure flashes some similarities to its 2020 top, signaling that it could see significantly further losses in the weeks ahead.

At the time of writing, Bitcoin is trading up just under 1% at its current price of $7,070, which is around where it has been hovering at throughout the past day.

This ongoing bout of consolidation beneath its key resistance region comes close on the heels of its notable upswing from lows of $6,600, with the dip below this level being met with enough buying pressure to help propel the cryptocurrency significantly higher.

Sellers have, however, stacked a significant amount of sell orders at $7,200, which is elucidated by the multiple rejections that the crypto has faced at this level in the time following this latest rally.

Analysts are noting that a failure for the benchmark cryptocurrency to surmount this level in the days ahead could be grim, potentially opening the gates for a sharp decline down towards the mid-$6,000 region.

“If price fails to breakthrough $7,170 then I expect it to revisit $6,570,” he explained while referencing the support and resistance outlined on the below chart.

BTC’s Market Structure Could Be Weaker Than It Seems

Bitcoin’s inability to surmount this resistance also comes as the crypto flashes some slight similarities to its 2020 top at just over $10,000 – which was set in mid-February before the crypto began its capitulatory downtrend that led it to lows of $3,800.

Another analyst pointed to this possibility in a tweet, explaining that although it is too early to know for sure, BTC’s current market structure is “awfully close” to how it was before the crypto declined from its February highs.

“The daily isn’t really super bearish, we should’ve closed below $7000 for that but it’s awfully close to how the $10k top played out,” he explained, pointing to a chart that highlights the similarities. 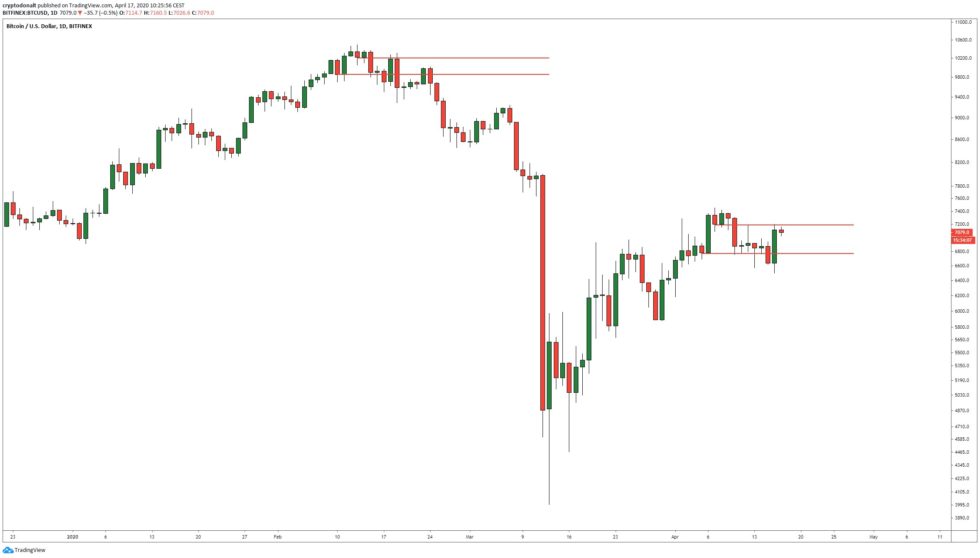 The coming several days should offer better insights into this possibility, as a tempered breakdown from here could confirm these similarities.

$7.6B Sitting in Stablecoins — Is This Bullish or Bearish for Bitcoin?

Crypto Gets a Taste of Movie Business, but Is a Long Way From the Red Carpet